Every Canadian deserves a safe and affordable place to call home.

Today, the Honourable Ahmed Hussen, Minister of Families, Children and Social Development and Minister responsible for Canada Mortgage and Housing Corporation (CMHC), along with David Eby, Attorney General and Minister Responsible for Housing announced details of a total investment of $25.1 million dollars for the recently completed Granite Ridge project in Whistler.

Of this amount, $4.5 million is through the BC Priorities Housing Initiative grant — an initiative under the Canada–British Columbia Bilateral Agreement on housing. The B.C. government, through BC Housing’s HousingHub, provided low-cost construction financing of approximately $10.2 million, which helped reduce the cost of the project for the Whistler Housing Authority. The final portion of this funding, $10.4 million, is being provided by the Government of Canada through the National Housing Co-Investment Fund (NHCF).

This project is a partnership between the Government of Canada, through Canada Mortgage and Housing Corporation (CMHC), the Province of B.C. through BC Housing, the Whistler Housing Authority, and the Resort Municipality of Whistler.

Located at 1330 Cloudburst Dr., the project provides 45 affordable rental homes for people for who work in Whistler. More than 100 residents are moving into the three-storey building, which includes 12 studio units, 12 one-bedroom units, 17 two-bedroom units and four three-bedroom units. Monthly rents are set well below the local average market rental rate.

Managed by Whistler Housing Authority, the project is helping to address the need for workforce housing in the community. Whistler has a high percentage of workforce employed in the resort’s service industry. Based on a recent housing assessment, the greatest need in the area is for additional affordable studio, one-bedroom and two-bedroom units that would provide rental relief for the workforce, particularly for young adults in the community.

“Our Government is taking steps, right now, to ensure that every Canadian has a safe and affordable place to call home. Our investments will go a long way to support those who need it most by quickly providing new affordable housing units to vulnerable individuals and families. Our Government’s plan under the National Housing Strategy continues to provide housing for Canadians from coast to coast to coast, including in right here in Whistler.”

“We know that people are struggling to find affordable housing, which is forcing them to commute from further and further away. These new rental homes will help give people working in Whistler the ability to live where they work. Through partnerships like this, we are building the homes that people need to stay in their community.”

“Today’s announcement shows what is possible when there is a commitment of all orders of government to work together. The result is Granite Ridge, which is now providing 45 safe, affordable workforce housing units in Whistler. Addressing our affordable housing challenge, and ensuring that the people that work in Whistler can afford to live in Whistler would also not have been possible without the local leadership of the Whistler Housing Authority.”

“The Resort Municipality of Whistler is grateful to the Province, BC Housing, CMHC and our housing partners for this critical investment in Whistler and in our community members. Access to affordable, resident housing is not only the foundation that supports our local economy, itis a critical contributor to our community vitality, diversity and connection. We are thrilled to see Granite Ridge transition from a building into a home for over 100 locals.”

“The Whistler Housing Authority is very appreciative to have received funding and support from both BC Housing and CMHC for Whistler’s newest affordable housing. Whistler is committed to actively confronting housing affordability in our community through the creation of affordable housing that is price and occupancy restricted for the local workforce. Over the last 20 years, the Whistler Housing Authority has partnered with all three levels of government, as well as the private sector, to create and maintain an inventory of 6,600 beds of affordable housing within Whistler.”

“Advocating for affordable housing solutions remains a top priority for the Whistler Chamber of Commerce. On behalf of our Members and the broader Whistler business community, we would like to thank the Government of British Columbia, the BC Housing Association and the Canada Mortgage and Housing Corporation for recognizing the challenges we face in Whistler, and supporting the community's ongoing effort to secure affordable housing for Whistler’s workforce. This funding will assist in the retention of permanent employees, who are vital to the mid and long-term recovery of our resort’s economy.”

“We’re excited to begin this new partnership with the Whistler Housing Authority, which offers vulnerable young people an incredible opportunity to find stability, opportunities, and community in Whistler. It’s great to see the community offer a broader range of housing on the housing continuum by empowering us to provide more supportive housing in Whistler. Beyond the immeasurable benefits for young people, this partnership is also an investment in a more diverse and sustainable Whistler community, which we’re thrilled to be a part of. We’re looking forward to collaborating further to meet the diverse housing needs of our community members.”

As Canada’s authority on housing, CMHC contributes to the stability of the housing market and financial system, provides support for Canadians in housing need, and offers unbiased housing research and advice to all levels of Canadian government, consumers and the housing industry. CMHC’s aim is that by 2030, everyone in Canada has a home they can afford, and that meets their needs. For more information, follow us on Twitter, Instagram, YouTube, LinkedIn and Facebook. 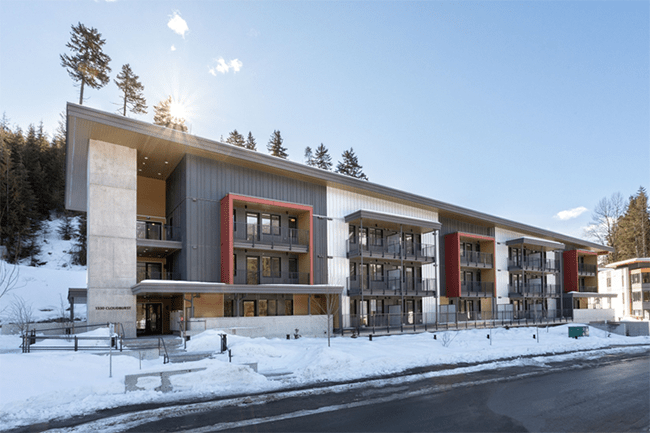