The trend in housing starts was 244,963 units in January 2021, up from 238,747 units in December 2020. This trend measure is a six-month moving average of the monthly seasonally adjusted annual rates (SAAR) of housing starts.

Due to COVID-19, CMHC’s monthly Starts and Completions Survey (SCS) for December 2020 was not conducted in the Kelowna CMA, it resumed in January 2021. This press release includes national housing starts totals without Kelowna in order to assess the impact of the COVID-19 pandemic where the SCS survey was conducted in both December 2020 and January 2021. The national trend and month-to-month change in the SAAR level was very similar with and without Kelowna in December and January. We will continue to monitor the situation in each centre and adjust the SCS accordingly.

Rural starts were estimated at a seasonally adjusted annual rate of 15,551 units (with and without Kelowna CMA).

Monthly Housing Starts and Other Construction Data are accessible in English and French on our website and the CMHC Housing Market Information Portal. Our analysts are also available to provide further insight into their respective markets. Housing starts data is available on the eleventh business day each month. We will release February 2021 data on March 15 at 8:15 AM ET.

Today at 10 AM ET, we are releasing a new Housing Market Insight — Housing Starts in Major Canadian Urban Areas, where we look at the location and patterns of housing development in Toronto, Montréal and Vancouver. We explore what factors are associated with these housing supply patterns and the level of housing completions using several metrics: distance from the city centre, transport choices, population density and family income. Our database of residential completions for the period 1990 – 2018 was used. 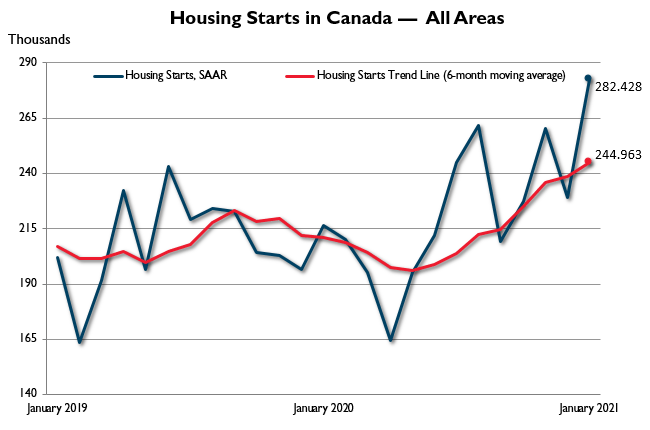 Data based on 2016 Census Definitions.