The trend in housing starts was 223,507 units in September 2019, compared to 218,782 units in August 2019, according to Canada Mortgage and Housing Corporation (CMHC). This trend measure is a six-month moving average of the monthly seasonally adjusted annual rates (SAAR) of housing starts.

Vancouver Census Metropolitan (CMA) housing starts continued to trend higher in September. Compared to the same period last year, year-to-date single-detached home starts declined while the multi-units starts increased. In September, more than 85% of new construction was multi-units, most of which were in the City of Vancouver and the City of Port Moody. Overall, continuous strengthening of economic fundamentals supported a steady growth of 23% in the year-to-date starts in the CMA between 2018 and 2019.

Housing starts in Edmonton trended upwards for the fourth consecutive month in September. The year-over-year increase in total housing starts was largely driven by the multi-family market segment as levels more than doubled due to a rise in both rental and condominium starts. Despite elevated inventories, new housing construction has picked up, leading to an increase in year-to-date housing starts.

Total housing starts in Saskatoon trended higher in September after construction on a number of condominium apartments got underway in the Brighton neighbourhood in the city’s east end. This supported a faster overall pace of multi-family construction, which offset a declining trend in single-detached starts during the month. Despite this increase in the six-month trend, total residential starts are down by 10% from January through September, compared to the same period in 2018.

The trend in total housing starts in the Kingston CMA stood at a 29-year high this September. Both single-detached and multi-unit starts trended higher, with the strongest growth coming from condominium apartments. Year-to-date apartment starts are at a four-decade high.

September total housing starts continued its upward trend in Toronto with all ground-oriented type home starts trending higher. The starts trends for semi-detached and townhomes were particularly strong, indicative of the popularity of these relatively affordable housing types among buyers looking for ground-oriented homes. Despite condominium apartment starts trending slightly lower in September, they continue to dominate housing construction across the Toronto CMA.

Total housing starts in New Brunswick increased in September compared to the same month last year. Multi-unit construction continues to dominate new home construction. The number of multi-unit starts this year is the highest on record for the January to September period. Sellers’ market conditions are contributing to the rebound in the single-detached market in major centres of the province. The September increase in single-family home construction was the second consecutive month of year-over-year growth. Year-to-date, total housing starts are 64% higher compared to 2018.

Rural starts were estimated at a seasonally adjusted annual rate of 12,699 units. 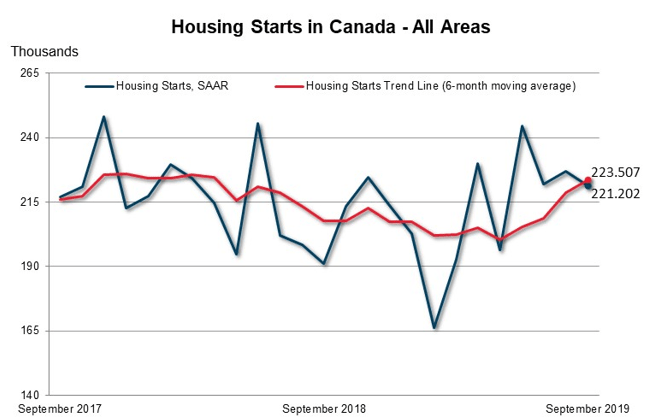