The trend in housing starts was 204,376 units in July 2020, up from 199,778 units in June 2020, according to Canada Mortgage and Housing Corporation (CMHC). This trend measure is a six-month moving average of the monthly seasonally adjusted annual rates (SAAR) of housing starts.

“The national trend in housing starts increased for a second month in July,” said Bob Dugan, CMHC's chief economist. “Higher multi-family starts in major urban areas, including Toronto, Vancouver and oil-producing centres in the Prairies drove the national increase. Following declines in previous months from COVID-19 measures, higher activity in June and July leaves the trend in housing starts in line with the long-run average level of housing starts. We expect national starts to trend lower in the near term as a result of the negative impact of COVID-19 on economic and housing indicators.”

Rural starts were estimated at a seasonally adjusted annual rate of 13,609 units.

Like many other government organizations, businesses and individuals, we are closely following developments around COVID-19. The monthly release of our Preliminary Housing Starts data will continue as planned. CMHC will report any impact on our ability to collect housing data. 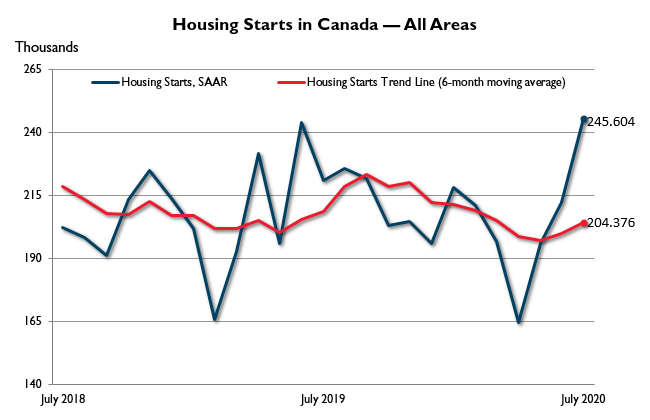