The trend in housing starts was 214,647 units in September 2020, up from 212,609 units in August 2020, according to Canada Mortgage and Housing Corporation (CMHC). This trend measure is a six-month moving average of the monthly seasonally adjusted annual rates (SAAR) of housing starts.

“The national trend in housing starts was largely unchanged in September,” said Bob Dugan, CMHC's chief economist. “Multi-family starts have been very volatile in recent months, partly reflecting the impact of COVID-19. High levels of multi-family starts in July and August were largely offset by lower levels in September, leaving the trend largely unchanged. This pattern was particularly evident in Ontario, including Toronto. We expect national starts to trend lower by the end of 2020 as a result of the negative impact of COVID-19 on economic and housing indicators.”

Rural starts were estimated at a seasonally adjusted annual rate of 13,071 units.

Like many other government organizations, businesses and individuals, we are closely following developments around COVID-19. The monthly release of our Preliminary Housing Starts data will continue as planned. CMHC will report any impact on our ability to collect housing data.

We are always looking to improve our products and the way we share key housing market data and analysis. As such, starting in November 2020, we will be moving our monthly housing starts data and news release from the 6th to 11th business day. This allows us to deliver a complete package of data all at once, rather than releasing preliminary data at an earlier date. October housing starts will be released at 8:15 ET on Tuesday, November 17, 2020. 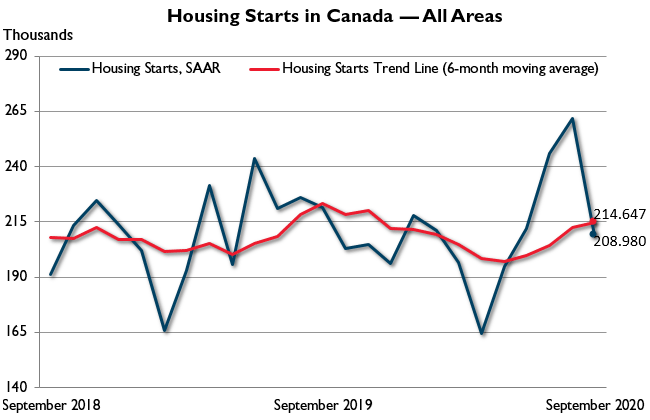